According to the Navajo Times, the Navajo Nation's Master Trust Program ended 2017 with $3.28B in assets under management (AUM). The trust portfolio is currently made up of 41% in domestic equities, 33% ("about one third") in fixed income, 6% in real estate and about 20% in other strategies.

The Master Trust is managed by the six members of the Nation's Investment Committee, made up of the following individuals (source):

The investment committee currently uses Portland, Oregon-based RVK for investment consulting services. RVK charges a flat consulting fee vs a fee based on assets under advisement (e.g., 10 BPS), and helps manage more than 20 fund managers across the asset classes.

According to a presentation from former Navajo Nation President Peterson Zah, the roots of the Trust started with $217M received from renegotiated royalties (coal, right-of-way, oil and gas) following the successful case against Kerr-McGee. That year, the Navajo Nation council passed resolution CJY-53-85 authorizing the creation of a permanent fund.

In 2002, a Permanent Fund Work Group (PFWG) was established to determine the details of the spending policy which was to begin in 2007. The work group recommended 50% of annual income would go to a Local Governance Trust Fund (LGTF) for certified chapters*, 45% of annual income would be reserved to plan for by the PFWG, and 5% would be reinvested according to the original guidance.

The group then sought to test its recommendations through public hearings. Overwhelmingly, the public advised the work group and Council to reinvest the income (at least until AUM reached $1B) and to add financial controls to restrict the spending of the principal or corpus.

From these sessions came 5 recommendations:
Protection of Assets:

Out of the recommendations came additional layers of financial control. Layer one requires a two-thirds vote by the Navajo Nation Council to authorize a referendum vote. The second layer requires approval by two-thirds of Navajo voters before the principal / corpus can be touched.

All-in-all, the Navajo Nation have been successful in the establishment and growth of their permanent fund. They took a deliberate step to establish the institution and save a portion of their wealth for the future, have been consistent with their strategy, and have been diligent on protecting the corpus through downturns in markets. They would be a good model to research if you're thinking of forming your own TSWF.

* The Navajo Nation government is broken down into Agencies (regional governments) and Chapters (local governments).
Posted by Jay at 12:07 PM 13 comments:

Did you see the news lately?

According to The New York Times, Cerberus rejected an offer valued up to $525M from the Navajo Nation to purchase Remington Outdoor (the gun manufacturer). Remington Outdoor is currently in Chapter 11 bankruptcy.

Navajo's plan for the business included both impact and return-oriented initiatives:


The Navajo bid was rejected after two months of consideration by the Remington Board of Directors.

The Navajo used the services of turnaround bankers Teneo Restructuring and was advised by attorney Drew Ryce, who was also involved in the attempt by Morongo to acquire gun-maker Colt out of Chapter 11 bankruptcy in 2015.

Both the Colt and Remington pursuits included a core thesis of helping the businesses qualify for government contracts under tribal / minority ownership. Generally, this is through the Small Business Administration's (SBA) 8(a) program. As a program of the SBA, any 8(a) advantages would be subject to size standards (i.e., the maximum size to be considered a "small" business) such as total revenue or number of employees. Assuming the use of NAICS code 332994 (small arms, ordnance and ordnance accessories manufacturing), the SBA states the size standard is 1,000 employees (link here for size standards). A quick google search shows Remington has more than 3,000 employees (source) and, as of Q3 2017, had $467M in revenue YTD.

As for the smart gun technology, NPR's Planet Money and Huffington Post both recently covered the challenges surrounding the technology.

The Navajo Nation made the offer in cash from its $3.3B investment trust. Had the transaction been completed, the single holding would have made up about 16% of the trust portfolio. According to a recent report from the Navajo Times, the trust portfolio is currently made up of 41% domestic equities, 33% in fixed income, 6% in real estate and about 20% in other strategies. RVK advises the trust committee as an investment consultant.

The Master Trust is managed by the six members of the Nation's Investment Committee, made up of the following individuals:
Interestingly, the President of the Navajo Nation has publicly expressed his concern on the offer: 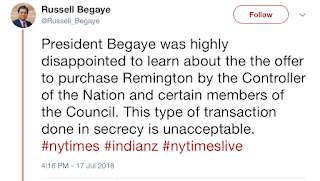 This would be an interesting case study for future board members and managers of TSW Funds.